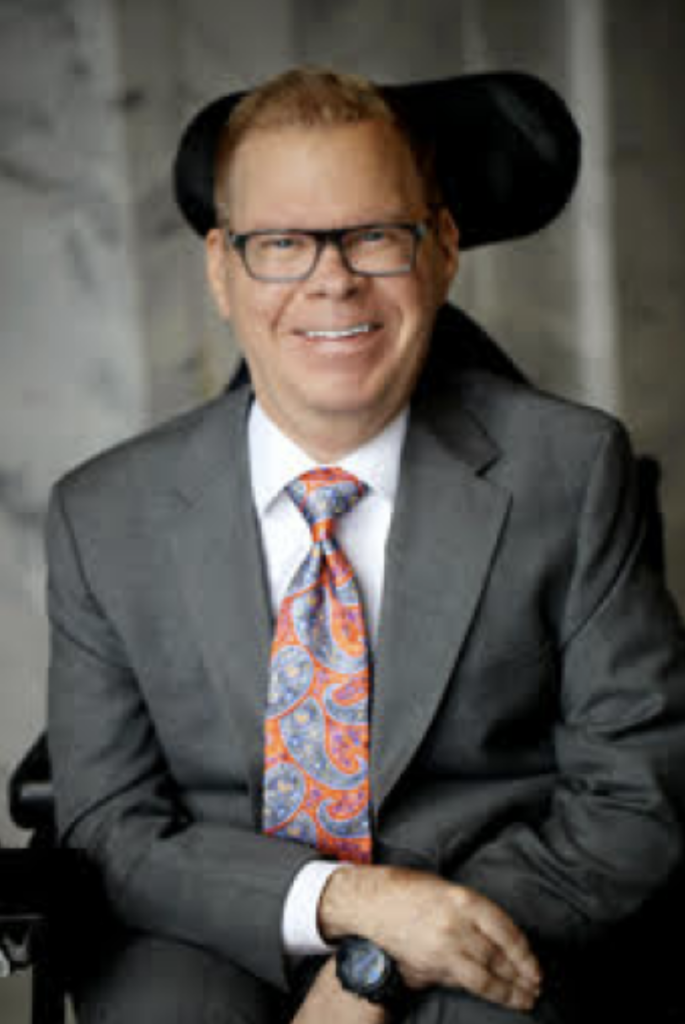 “All of Us is not just about data points. It’s about listening to people’s lives. Life is a difficult proposition for everybody.”—Stephen Mikita, All of Us participant partner and retired assistant attorney general of Utah

Stephen Mikita not only defied the odds, he redefined them.

At 15 months old, Steve was unable to stand or bear weight on his feet. Although he crawled at times, he couldn’t walk. His parents took him 40 miles from their Ohio home to be examined by a Pittsburgh neurologist, who assured them their toddler was just slow to develop and would be walking soon.

Steve’s parents were doubtful. His father, William, an orthopedic surgeon, and his mother Mildred, a high school chemistry teacher, had two healthy older children, Carole and Bill, and knew something was amiss.

Within a few months, Steve’s father had arranged a visit to the country’s leading biomedical research center, the National Institutes of Health, in Bethesda, Maryland. After three days of tests, Dr. and Mrs. Mikita received the devastating news: Their young son had a rare degenerative neuromuscular disease called spinal muscular atrophy (SMA).

Since then, Steve not only has been pushing the bounds of medicine through his own personal experiences and treatments, he has been living life to the fullest—going on to a high-profile career as assistant attorney general in Utah and becoming one of the oldest people in the United States with SMA.

In 2016, years after his first NIH visit, Steve again made his way back to the agency—this time to help guide the All of Us Research Program as one of the first participant representatives on its Steering Committee. Since then, he has been an invited speaker at national events heralding the program’s innovative mission and goals.

“Another one of life’s great ironies,” Steve said with his characteristic wit. “What are the chances of this kid in 1957 being told, ‘There is no cure; everything seems doomed,’ to be back more than 60 years later at the NIH to participate in All of Us? …It is an unbelievable blessing.”

Today, Steve leads a participant advisory board for the program’s Participant Technology Systems Center, managed by Vibrent Health. He is a passionate advocate for the program, which he sees as key to advancing diagnoses, treatments, and medical breakthroughs.

“This type of research program has never been done before in the history of our country,” Steve said. “It’s revolutionary in nature both in its scope and scale. It gives me pause, still causes me a surge of emotion, when I contemplate the altruism and volunteerism that capture the best of our national spirit. All of Us is about becoming part of something that is so much larger than you and me. It signals a firm commitment to understand us—both who we are and where we are—our health and wellness—in a very individualized, customized manner.”

When Steve first came to NIH, doctors didn’t know his rare disease had various strains. They only knew about one type of SMA, a disease that progressively destroys motor neurons—nerve cells in the brainstem and spinal cord that control muscle activity, such as walking, speaking, breathing, and swallowing.

“Why is it that I have lived so long while others haven’t?” Steve asked. “What is the difference between spinal muscular atrophy type 1 and type 2 and type 3?”

Without data, researchers won’t know, Steve added. Eventually, he predicts, the All of Us Research Program will have collected so much data from one million or more diverse participants that scientists will have the ability to “ask and answer questions about health and disease that they didn’t even know existed before.”

A Will to Survive

Throughout his childhood and adolescence, Steve had multiple hospitalizations. One of the most traumatic and life-threatening was at age 12, when he underwent spinal fusion surgery. The risky procedure hadn’t been done on individuals with disabilities before, and there was no precedent for this type of surgery with adolescent patients. Doctors offered a 50/50 chance of survival for the surgery. But by then, Steve had a history of beating the odds.

The surgery was ultimately successful, but there were numerous hospital follow-up visits. The recovery was painful and prolonged by complications from his disability. He remained in a full body cast for six months, house-bound and prostrate with an 18-inch bar wedged between his knees.

“Basically, I lived a turtle-like existence. The cast created pressure points on my tailbone, which still at times cause me pain,” Steve said. For the gregarious, popular junior high schooler, missing his friends and classes was one of the hardest experiences.

“When you grow up never being invited to a birthday party because you can’t get into a home, because it’s inaccessible—or any other public place—you can feel very isolated,” Steve said.

“Those were traumatic experiences. They can lead one to a lot of self-examination and questions of faith and whether to push forward or surrender,” Steve said. “Fortunately, I chose the former. I had enough experience with the best parts of my life. They informed me and helped me realize it’s still worth it. I could endure this and adapt and modify.”

The support, love, and acceptance from Steve’s parents, siblings, and friends were a constant source of strength and motivation. One of his fondest childhood memories was the weekly Sunday visit from his uncle John, his dad’s brother.

“He would pick me up and dance the polka around the kitchen,” Steve said.

Steve’s older brother Bill adapted their pick-up football, basketball, and other sports games to include him. For baseball, Steve would bat while sitting in his wheelchair, while his younger sister, Judith, would run the bases. For football, Steve could rush the quarterback in his wheelchair, or he would sit in the end zone, dressed in full football regalia, while Bill would make the perfect toss, landing the football comfortably into Steve’s lap for the winning touchdown.

“Making these accommodations, including me and recognizing that I had a role, elevated my feeling of participation and inclusion,” Steve said. “I had an idyllic childhood. The message I received early in life was total acceptance and celebration, that it was OK to be different. That I was unique.”

The All of Us Research Program Cultivates Unique and Different Partners

It was that message, in part—of a steadfast commitment to inclusion and diversity—that motivated Steve to join the All of Us Research Program as a participant, as well as an advisor.

“Differences make us stronger,” Steve said. “They make us better people because we understand the differences and commonalities that weave throughout all of our lives.”

The more people who join the program, the better informed researchers will be, Steve said.

“We need all these voices, and we need to listen with humility and honesty to understand that this is not one-size-fits-all. Not every condition expresses itself in the same way to so many people. This program will have profound implications that can change medicine.”

“My mother always said, ‘With every hospitalization, it gives us information that we need to prolong your life and make you stronger and healthier,’” Steve said. “That basically captures the vision of precision medicine and partnering with participants. The engagement is so critical to medical research. Without ongoing longitudinal data, we simply cannot develop treatments and products to aid individuals. Participants’ information is critical.

“I am so optimistic about All of Us because there is this constant, ongoing outreach asking participants to ‘tell us more about you’ so that we can do our research, not only to help you but to help your family and your community.”

A Voice for the ADA to All of Us

Continuing to pave a path for others, Steve was the first freshman to attend Duke University using a wheelchair. He completed his law degree at Brigham Young University and spent several summers as a law clerk for the late U.S. Senator Orrin Hatch of Utah.

In the early 1980s, Steve had numerous discussions with Senator Hatch about the importance of the then-proposed Americans with Disabilities Act, which marked its 32nd anniversary this July as a historic civil rights law protecting all people with disabilities.

“My life has always been full of purpose,” said Steve. “What gives me that fulfillment is that I’ve tried to be a voice and an advocate for others who were unable or unwilling, through no fault of their own, to advocate for themselves and to right the wrongs and the grievances that they experienced. I have gained an appreciation and compassion for underrepresented communities, especially communities of color who have been ignored or marginalized by medical research and, in some tragic instances, victims of immoral, unethical research.

“Had I not gone through what I went through,” Steve added, “I wouldn’t have the fire and passion to ensure that they can one day live a life free from as many limitations, injustices, and unnecessary obstacles as possible.”